This page is an online space for the LGBTQ+ community to share their experiences with the option of anonymity. We hope this will be a place of guidance where students struggling with their sexuality can come to have access to stories they would not have had access to otherwise. We hope that this will be a space where parents with children in the LGBTQ+ community can gain more knowledge about what it is like to be in the community to be as supportive of their children as possible. Finally, we hope this will be a safe space for students so all appropriate stories can be reviewed and published.

Students in the LGBTQ+ Literature class studied, among other things, how fairytales are constructed, both in terms of content and language. They read fiction that incorporated the tropes of fairytales and read essays about the philosophical underpinnings of the genre and the code language used by members of the LGBTQ+ community during the time homosexuality was illegal. Students then wrote fairytales of their own using the knowledge they’d gained. These are a few of the fairytales the students created.

Clubs & Organizations
“Gathering in safe spaces around shared identity allows students to engage in conversations about how they can subvert the structures that push them to the margins.” - Teaching Tolerance 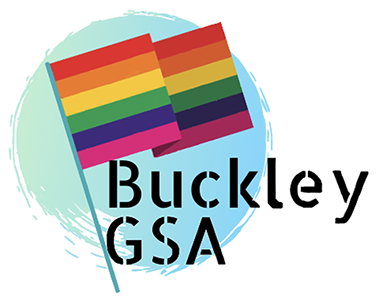 The Genders & Sexualities Alliance is a club consisting of students across all spectrums of gender identity, gender expression, and sexual orientation. We exist for LGBTQ+ students and allies alike to find an open, safe space for them to gather in their truths, whether discussing LGBTQ+ media or holding larger conversations on LGBTQ+ issues as they apply to Buckley and the world. GSA offers a place for students to celebrate both their differences and their similarities, and to become aware of how to better support each other. Externally, we serve to educate the Buckley community through symposia, assemblies, or events and spaces designed to promote LGBTQ+ awareness and solidarity. Our primary concern, however, is serving the wellbeing of Buckley’s LGBTQ+ students and providing them with the needed place to feel welcomed and safe, both at Buckley and beyond.

On July 16, 2022, a new dialing code goes into effect for the Suicide and Crisis Lifeline: 988.
This national, three-digit dialing code was designated by Congress to provide 24-hour access to a trained crisis counselor. Like 911, the number is easier to remember and for emergencies but offers specialized support in mental health. The number is available to call, text, or chat.988 was established to respond not just to all youth, but specifically those who identify as LGBTQ+. According to a recent study by the Trevor Project, 45% of LGBTQ+ identifying youth have considered suicide over the past year.
Anyone of any age can use 988 to seek help for themselves or for advice regarding friends and loved ones. If you are unsure about whether your concern is appropriate, call. A counselor can help you assess your needs.
Student Quotes
Useful Source Material

Looking for LGBTQ+ books to read this summer? Here are some great places to start.Try These Books
Detransition, Baby by Torrey Peters
Crossing by Pajtim Statovci
On Earth We're Briefly Gorgeous by Ocean Vuong

© 2015 The Buckley School. All Rights Reserved